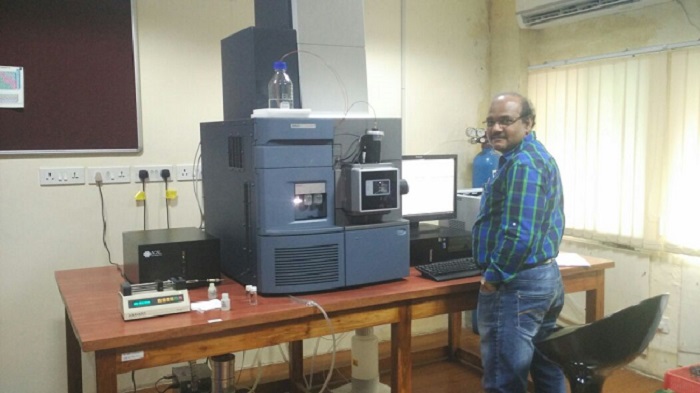 Faculties can request Slots within the internal network.

The Xevo G2 QTof mass spectrometry system, being a combined quadrupole and time-of-flight mass spectrometer, is intended for use as a research tool. Its detector acquires thousands of complete spectra per second. These spectra are mass-corrected and summed for a defined scan time. Equipped with a ZSpray atmospheric pressure ionization (API) source along with a built in lock-spray mechanism, offers exceptional levels of sensitivity, selectivity, in-spectrum dynamic range, speed of analysis, quantitative accuracy and exact mass performance simultaneously for any experiment, whether MS, MS/MS or MSE.

Xevo G2 QToF is most sensitive, exact-mass, quantitative and qualitative benchtop MS and MS/MS system available. It delivers not only conventional MS and MS/MS methods of data acquisition but also has the ability to perform UPLC/MSE to collect the maximum amount of data from a single analysis.

The instrument is equipped with

(iii). a high performance orthogonal acceleration Time of flight (oaToF) mass analyzer with a mass range up to 100,000 m/z and a resolving power of 20,000 FWHM.

The system's two main modes of operation are MS and MS/MS. In a QTof instrument, for MS mode, the quadrupole passes all masses, and the time-of-flight (ToF) records the spectra. For MS/MS mode, the quadrupole selects masses, the collision cell fragments the ions, and the ToF records their spectra. The ToF analyser has two modes of operation, Sensitivity mode and Resolution mode.

Lock-Spray Source with ESI Probe - Fitted with the standard Lock-Spray source enclosure ESI, the lock-spray mechanism enables the collection of lock-mass data for use in generating exact mass results. During an acquisition, an oscillating baffle switches between the sample spray and the lock-mass spray, and a separate data function is captured for each. Peaks of known mass are tracked in the lock-mass data, and their position is used to calculate lock-mass correction for the sample data.

Lock-Spray Exact Mass Ionization Source - Traditionally, to obtain valid exact mass measurement, an internal reference or “lock mass” was used to correct for changes in environment or experimental conditions over the course of the analysis. This was achieved by “teeing in” a suitable reference compound to the main analyte flow. However, this approach often suffered from ionization suppression, potential mass interferences and solvent gradient effects.

An oscillating baffle driven by a programmable stepper motor samples the two electrospray streams separately. The reference spray is sampled at pre-defined intervals so that the acquisition duty cycle favours the analyte liquid stream. The sampling baffle position is monitored in real time to allow the two liquid inlets to be indexed and the reference and sample data stored in separate files. The LockSpray source design eliminates cross-talk between the analyte and reference channels, ensuring the integrity of the exact mass data.

Elemental Composition Estimation - Using this feature, the elemental composition of molecules can also be estimated by inbuilt MassLynx 4.1 software.

(I). ESI – Standard Lock-Spray Source with ESI+ve and of ESI–ve modes which can be altered depending on nature of the compound.

(II). ESCi - Enables MS methods to be developed that use both ESI and APCI in the same analysis by combining high-speed switching within the ion source.

Instruments are operated in combined Electrospray/APCI mode (ESCi). This provides for the acquisition of both analyte data in APCI mode and reference data in electrospray mode, enabling exact mass measurements to be produced.